Alright dorklords, here comes the first ever Chesapeake Team Butts Pathfinder game! It’s planned for 1/28/12 at 5:30ish. We’re pretty much well-versed in how Pathfinder goes down already (say we’ll start at 1 PM, start at 5 PM, turn into a scene from 12 Angry Men when it comes time to decide where to eat, etc.), but this game’s going to be a bit different. In an effort to be less work for the players, we’re going to have slightly different rules. First off though: 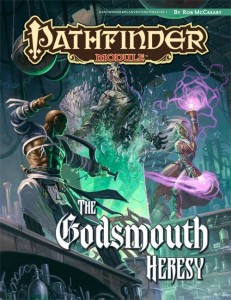 Here is the module I’ll be running. It’s a well-regarded 1st-level module. Here’s the description:

“The priests of Pharasma in the strange city of Kaer Maga have long sold plots in their ossuary to those rich enough to afford them – a place of honor and stature for one’s bones to lie after death. Yet now, this mausoleum has become full, and it is time to break into a new and unexplored wing of the dungeons under Kaer Maga to create more room. To a band of fledgling heroes, eager to make names for themselves, this represents a singular opportunity – a chance to explore a heretofore sealed section of the Godsmouth Ossuary and perhaps make a fair amount of gold on the side. The only catch is that they’ll need to survive what strange and ancient mysteries lie within! An urban and dungeon adventure for 1st-level characters.”

So polish up on your boner puns dammit.

The Players:
These are the people I have signed up as definite so far:
Bob – Asaarnian cleric
Enoch – Changeling summoner
Steven – Leaning towards magus
Eric – Some sort of tank
Jack – Half-orc ranger
Rules: (more may be forthcoming)
1. Regarding Class/Race/Archetype – You can be any race/class/archetype from any of the Paizo-published books. No third party stuff. Now you can be that Tengu Druid you always wanted to be but if you pick Kitsune I swear to all the Gods in the Heavens that I will bring all my anime Ore wa baka neko yamate yo onii-chan Japanese down upon your head and play the Revolutionary Girl Utena soundtrack whenever you move. Nobody wants that.

2. Regarding Alignment – Your alignment has to be above chaotic neutral. This is a conscious effort to promote better synergy and roleplaying amongst the group.
3. Regarding stats –  You get 75 points divvied up through the 6 stats. Minimum stat must be 8, no more than 2 stats at 18. This is before racials. This puts us at the ‘Standard Fantasy’ level. When we’ve played at 85 points pre-racial we’ve noticed that our Kroxes cause monsters to burst like they’ve been hit with a cannon, our spellcasters are basically Arks of the Covenant in robes, and watching our gunslingers fight is like watching the Zapruder film: Lord of the Rings edition. Our bards remained comically inept.
4. Regarding the first level –  You get 1 extra skill rank or 1 max HP at first level.
5. Regarding backstories –  A backstory would be appreciated, no matter how short. At the very minimum, you have to have a reason why you’re in Kaer Maga and agreeing to do a job like this in the first place.
6. Regarding traits –  To compensate for the lower stats, I’ll be allowing two traits at start. Try to work them into your backstory (it’s generally pretty easy).
7. Regarding cards/skill spreadsheets –  Not required but they are very useful and they help speed things along. At least bookmark or keep track of your skills in your books or smartphones.
8. Regarding buying stuff – Kaer Maga’s a pretty anarchic city and close to Korvosa, so you can buy what you want for starting gear with your starting wealth.
9. Regarding carrying capacity – Adding up weight and shit and calculating encumbrance detriments is a lot of work. I get that. So to make things smoother I’ll say this: For our purposes our rule is going to be (within reason) use the speed given by your armor stats, but as long as all your junk doesn’t take you over the max med. load, assume no encumbrance detriments. That sounds like a weird rule, but again, since we’re playing with lower stats than normal I’ll allow it.
10. Regarding character sheets – Make one on DNDsheets and send the link to me beforehand if you would. I might tinker with and add bonus checks/spot checks/rooms etc. if there are some checks that people have that the module doesn’t use. (I probably won’t subtract checks.)

Also, if you have a snack/drink/liquor/beer preference, send a shout out and I can get some.