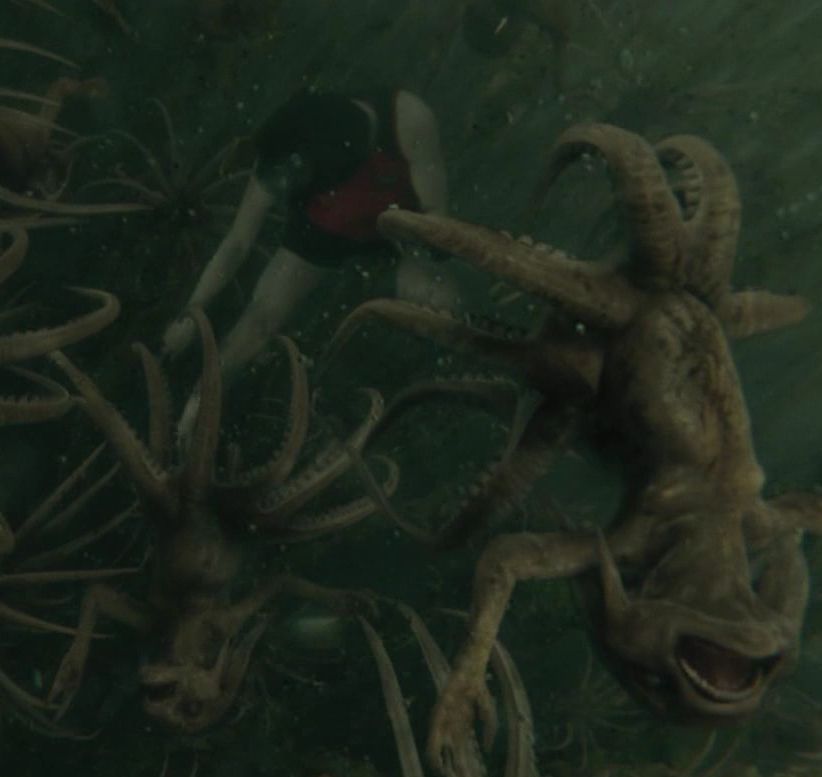 I hope you all had a good time during the last session. Sorry for the late write-up, I’ve been busy lately! I’ve been preparing custom character sheets and monsters–plus fleshing out some story handouts and the map–for the next part of the module for a while now. Hopefully you all enjoy it!

Hero Lab’s made it much, much easier for me to make custom designs while keeping the nitty-gritty backend calculations for stats, skill levels, etc. straight. All the special grindylow types from the last fight (the Kelpcallers, Wavesmashers, and Nightfeeders) were custom made from a base grindylow template.

1. Session rundown –
It’s been minutes after Mr. Plugg and Master Scourge, the twin disciplinarians of the Wormwood, met their grisly end at the hands of the party and their compatriots. Safely out of danger, Theodore and Likour (along with their newfound compatriot Omar) start to quickly examine the exotic ill-gotten treasures of Plugg and Scourge.

Star Killer, meanwhile, calls over Sandara and Conchobhar and reveals the true nature of the party: they’ve been sent to rescue the two lost Pathfinders on behalf of the Heidmarch Manor! The two Wormwood pirates express surprise that they warranted a rescue mission, for they had long despaired of ever escaping the clutches of Barnabas Harrigan. They gladly agree to travel back to Magnimar with the group.

The adrenaline of the battle dying down, the group gets to work settling minor matters and examining the Man’s Promise. Star Killer finds a lucerne hammer in the bilges and decides to make a weapon change. Likour and Banmoril free Owlbear from captivity. Star Killer also examines the plunder Scourge and Plugg were hoarding: a carved rhinoceros horn and a Rahadoumi tapestry. They seem valuable but purely ornamental, so the party makes a note to check into these items later.

Kroop gathers everyone around to announce that he believes the remnants of the Wormwood and Man’s Promise skeleton crew should ally with the raiding party. The remaining crew–Grok, Rosie, Cogswell, Omar, Erik, Latricia, and Owlbear–agree and toss their lot in with the Pathfinders.

At the suggestion of Kroop, the party catches a southwesterly wind to gain momentum to loop back around and leave the Shackles for Varisia. However, in Plugg’s haste to squib the ship himself, he set them on a course into a shoal- and reef-infested part of the archipelago! To make matters worse, a Shackles squall quickly bears down upon the beleaguered ship, forcing the group to call all-hands on deck.

With Erik and Grok keeping the mainsail lashed, the crew elects Hrafn to take the helm. Night soon comes, and the storm hits the ship with a furious intensity. Unfortunately, in the tumult a mass of grindylows ambushes the ship! It’s a pitched battle in near total darkness as the crew desperately tries to fight off the strange creatures!

Star Killer manages to break in his new lucerne hammer, and he finds it hasn’t worn down in the slightest during its rest in the bilges. Likour uses his strange illusions to craft the sound of the grindylows’ most-hated enemy–squids–to off-put them. Thoka uses her bizarre snake-like eidolon to great effect; first by having it attack the ambushers and then by having it assist Hrafn in a battle with the grindylow kelpcallers.

Banmoril uses Plugg’s Tidewater Cutlass to deliver fatal electrical discharges to the shadowy grindylow nightfeeders. Hrafn attempts to save the women fighters–Rosie, Sandara, and Latricia–on the foredeck only to find his efforts rebuffed by the kelpcallers Entangling spells. And finally, Theodore uses his powerful bombs to make several grindylows sorry they ever came out of the water!

Despite their best efforts though, things take a turn for the worse. The ship hits a submerged reef, and Rosie is captured (alive) by the grindylows! Everyone quickly dispatches the remaining grindylows on board, and Hrafn sets to work righting the ship through the shoals and reefs. Star Killer gets the idea to fother the sail over the new leak, and along with Theodore’s use of the Touch of the Sea extract, the ship is saved from sinking. Hrafn decides to steer the ship in the direction of an island the grindylows were heading towards, seeing no other alternatives.

The crew works through the night, and by morning they safely see the ship into a small beach. What they find is unnerving: submerged skeletons covered in scrimshaw, and a heavily-decayed corpse of an unfortunate sailor. On his person are three papers: a map of the island, a note to his love back in Riddleport hinting at a plague and a mad captain, and a disturbing note talking about something called the “Blessing of Croatoan”.

The party then decides to rest up, and then explore the island and find Rosie.

Nothing to speak of from the grindylows, though much of the unidentified loot from the Plugg and Scourge fight was identified.

In addition, these items were identified: