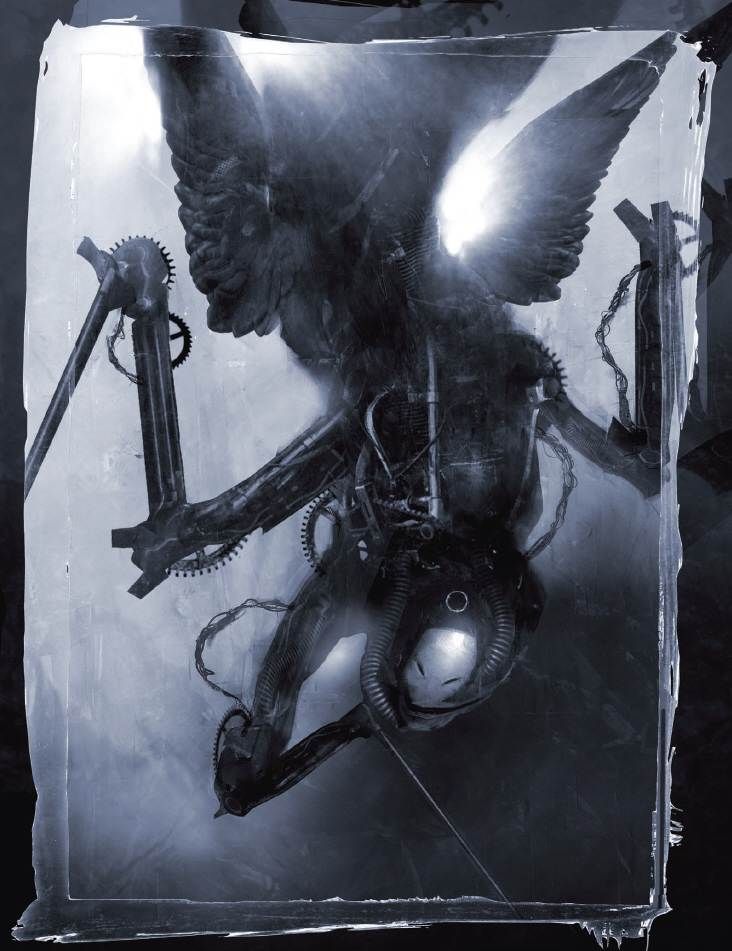 Demon: the Descent is a World of Darkness game, which has since had its name changed to Chronicles of Darkness for reasons. Opposed to Abrahamic notions of God and angels, the real God is the God-Machine, an uncaring cosmic intelligence, and angels are techno-organic constructs created by the God-Machine to do its bidding.

Whatever’s in block quotes is taken directly from the text.

In Demon you play one of the Unchained, a renegade angel hiding among the humans of the World of Darkness. Fallen from your loyal, unthinking state as an agent of God, you struggle to reconcile the human life you wear with your nature as an inhuman being designed to fulfill a function, while you decide what to do with your precious, hard-won freedom. Will you oppose God’s plans? Build a life for yourself from the traded lives of humans? Keep yourself safe at all costs? Or try, somehow, to regain God’s favor?

Demons are surrounded by the evidence of their former selves. The God-Machine has gears and facilities all over the world, invisible to the naked human eye but all too obvious to a demon trying to remain unnoticed. The Unchained sense the God-Machine’s workings, see their angelic brethren hurrying on their missions, and wonder what it could be planning this time. Is it finally coming for them, or just victimizing the humans the demon now lives among as part of its never-ending maintenance of the miserable status quo?

Hunted by angels, confronted with the God-Machine’s plans, demons must decide what they will do with their unique perspective. Some interference is prudent — demons hack into angelic communications, learn all they can about their former master’s plans and spy on its facilities out of a sense of self-preservation, making sure they’ll know if they ever become exposed. More than that, though, demons’ ideologies drive them to confront the God-Machine, spurring them into action in defense of their new lives, human friends, or self-worth. Demons disrupt the God-Machine where they can and fade back into the disguise of humanity before the angels arrive. They band together in mutual distrust, never knowing why another demon Fell, their clandestine societies in constant danger of infiltration.

This is life as a demon. The Unchained are undercover, underequipped, and trapped in a hostile world, searching for a way to complete their Descent and reach some new Hell; a world without God where they can be free.

Demon has a lot of terms to throw around (sorta like Changeling does). The game itself is billed as “a game of Techgnostic Espionage.” It’s very, very spy-like, with the GM as Big Brother and the Demons as rogue agents striking back where they can and generally trying to keep safe and secure. One of the interesting thing is that Demons, when they disconnect from the Machine, are shunted into their human cover (almost always given to Angels who have to move among humans without freaking them The Fuck Out). You can have multiple covers, and each cover’s ability to hide you is linked to its metaphysical concreteness: the more you stay in character and do the sorts of things your Cover would, the stronger it becomes, and the more difficult it is for the God-Machine or its agents to find you. The weaker it is, and even normal people might start noticing how your home is on the 15th floor of a 14-floor apartment building, or that you wear literally the same thing every day, in the same condition, with the same stains.

Cover can be attacked/lost by a lot of different things, but the end result is the same: if you drop down to zero, you lose your cover, you manifest in full demon form, and you flare up on the God-Machine’s radar like a solar flare. Watch out!

Our game in particular:

So there’s a lot of stuff in Demon, and I’ll pick out pages for you to read if enough people are interested. For our purposes, I’d like to run Demon on Roll20. The difference will be, aside from handout and so on, and maybe crude representations of environments, there will be no board.

Also, the game will be played via text.

What I mean is that, obviously we’ll all be on voice chat, and any talk between us (referred to by losers as ‘out of character’ talk) will be via audio, but the game itself — dialog, choices, descriptions, whatever, will be through text. It’s the kind of thing the World of Darkness system lends itself to pretty well, and I think that, given a less combat-focused game, utilizing text chat will offer a lot of benefits. For one, it’ll be easier to stay in character, and hopefully will be more immersive. It also gives us all an opportunity to think about what we want to say before we blurt it out, which is particularly important for me. It also also gives us a separation between FriendTalk and GameTalk, which should make it easier for people to ask rules questions and discuss intentions/decisions without worrying about talking over others or getting sidetracked/ignored.

So that’s my very brief and short post for now. I’ll edit/add to it later with more specifics. The game will begin in late December/early January, and run for the foreseeable future (after this semester I don’t really have any classes left to take, which is noice). I’m not sure where the setting will be yet; I’m willing to take suggestions. For an example of what kind of weird shit happens in Demon, the provided setting, Seattle, is home to a variety of time shards, within which are periods of time (I think a year long?) from throughout the city’s history, remnants of some God-Machine experiment with temporal distortion. So if you have any ideas of a setting or particular elements like that weirdo guff, please let me know.

Some information on character concepts:

First are the Incarnations, which are built into your character. They describe what kind of Angel you were, more than anything else, and not necessarily your current attitude as a Demon. So you can be a Destroyer pacifist, for example. It just means that your demon form will be focused on the destroying parts, and might make it challenging to play.

Destroyers: Destroyers are built for precision and shocking overkill. Some are hulking and powerful, designed before they Fell to fight powerful supernatural creatures, but most Destroyers have a disturbing sleekness about them in demonic form, befitting the God-Machine’s assassins rather than tanks. Their demonic forms are usually armored and armed with weaponry fused into the limbs. Many have multiple arms, prehensile tails, or tentacles holding extra weapons.

Guardians: Guardians are built for adaptability and improvisation. They often have extra sensory apparatus attached or are highly mobile to better react to new threats. Some Guardians are walls of steel and flesh, physically blocking the enemy away from their charges while others rely on stealth to pick threats off.

Messengers: Messengers spent more time disguised as humans than other angels and are more comfortable acting in Cover than their Unchained peers. Their demonic forms are usually built for intimidation and respect, with commanding presences, hypnotic voices and “special effects” like haloes, decorative wings, energy effects, and other ways to hold and command the attention of human witnesses. A few Messengers specialize in stealthy forms, though, and are much smaller and plainer. Many Messengers can emit and receive communications beyond the human range — they can speak in radio waves or control computer networks.

Psychopomps: As their nickname implies, Wheels were not usually humanoid in angelic form. They’re the most likely demons to have inhuman shapes in demonic form — spinning wheels of metal and fire, rotating clusters of spheres and axles, dozens of wings converging on unseen bodies, and other stranger shapes abound. Multiple limbs are common, the more the better. Even humanoid Psychopomps sport unusual forms of locomotion. 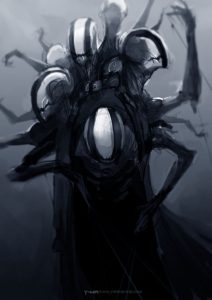 Some teaming-up is prudent to better mitigate threats, work together, and even just have someone to talk to about the stresses of the Descent, but beyond one’s immediate rings, most demons view Unchained strangers with suspicion until they’ve proven themselves. Even then, members of the same ring routinely keep “professional” distance from one another’s Covers and watch for signs of betrayal. The exceptions — Agencies — form when two or more rings decide to work together to accomplish a goal, but agents view one another with even less trust than ringmates.

The threat of betrayal isn’t a paper tiger, either. The God Machine wants demons back, whether for “redemption” or recycling, and it assigns angels to counterespionage, infiltration, and assassination roles. Demons spying on Infrastructure often find that they’re being spied on in return by loyalists. If angels uncover a crack in a demon’s Cover, they exploit it until the Unchained can be forced into exposure.

Espionage stories revolve around moral compromise. They’re about shades of grey, professional enemies being forced to act in terrible ways to accomplish their goals. When a ring destroys an Infrastructure, innocent lives may be lost in the crossfire. To gain the trust of smugglers she needs for her Agency’s operation, a demon may have to commit crimes. When an angel comes for a demon, it doesn’t care who gets in the way and it doesn’t matter that the angel is essentially a slave — if the demon doesn’t kill it, his own life is forfeit. Naïve demons talk about the “greater good” or justify their actions as necessary, but those further down the Descent know that it’s not that simple. Sometimes in order to go on living, a demon must cross a line or abandon a moral code. A demon who never had to break his own rules is young, lucky, unstable to begin with, or an infiltrator working for the God-Machine

Rules for how to play Demon

Cold War operatives working in Moscow, under threat of extremely harsh treatment if they were discovered, worked to an unwritten code commonly called the Moscow Rules. As demons face similar circumstances, they’re useful as “good advice for demons” in your games. Agencies teach them to newly Fallen Unchained in order to instill the proper amount of paranoia in young demons. Mistakes happen, of course.

• Never go against your instincts.

• Everyone is potentially under the God-Machine’s control.

• There’s always someone watching you. Don’t look back and don’t run.

• Go with the ﬂow and blend in.

• Avoid building up a pattern, and stay in Cover.

• Lull them into a false sense of complacency.

• Pick the opportune moment for action.

• Always have a back-up plan